Want to receive our information package?
It is now FREE!

WE WILL HELP YOU

The changes carried out in the Canadian immigration system since 2012, have also affected the spousal sponsorship. Last amendments that came into force in June 2015 affected the regulations related to the recognition of marriages that have been concluded without the physical presence at the ceremony of one or both parties (proxy, Internet, telephone or similar). The sponsorship of a spouse, married in one of the mentioned ways is not valid anymore. Exception has been made for members of Canadian Armed Forces.

In addition, sponsoring a spouse is only possible if both the husband and wife are at least 18 years old when applying for sponsorship. Such rule also applies to common-law partners.

An important factor determining the eligibility for sponsoring the spouse by a Canadian party, is not only the legitimacy of the marriage in the country of its conclusion, but the recognition of such marriage in Canada. Marriage between close relatives, or polygamy, for example, are not subject to sponsorship.

The new regulations were adopted to prevent forced marriages and infusion in Canada of barbaric customs that infringe the freedom and rights of young women.

Introduction of a Conditional Permanent Residence Status of the sponsored spouse is the additional significant amendment to the immigration law that took effect in October 2012. It was introduced to protect Canadians, whose sincere feelings are often used to obtain an official status in Canada, as well as to prevent fictitious marriages.

The essence of the new regulation lies in the fact that if the sponsored individual has been in relationship with the sponsor for at least 2 years and has no children in common, he/she is granted permanent residence status in Canada for only 2 years period, and the couple must live together throughout this period.

If the couple even temporarily separates (except for short business trips), the permanent status of the sponsored spouse will be canceled, and the individual will be obliged to leave Canada. Exceptions may be made upon confirmation of the facts of physical, psychological, financial abuse, violence or neglect.

Moreover, according to the same amendment, which came into force in June 2015 in the case of further divorce (after a 2-year period), the sponsored spouse may not sponsor a foreign national as spouse, within 5 years from the day the permanent residence status has been granted to him/her.

Individuals who have permanent resident status in Canada, but are not its nationals or residing outside of Canada can not sponsor their wives / husbands. They can start the sponsorship process only while being in Canada.

Restrictions in respect of those who may not sponsor their foreign spouses or common-law partners did not change and consist but not limited to the following:


Before marrying someone who is not a resident or citizen of Canada, ask yourself whether you will be able to ensure a joint residence in Canada or not, and how will you sponsor your soulmate.
If you have difficulties answering these questions, just ask us! We will help you! 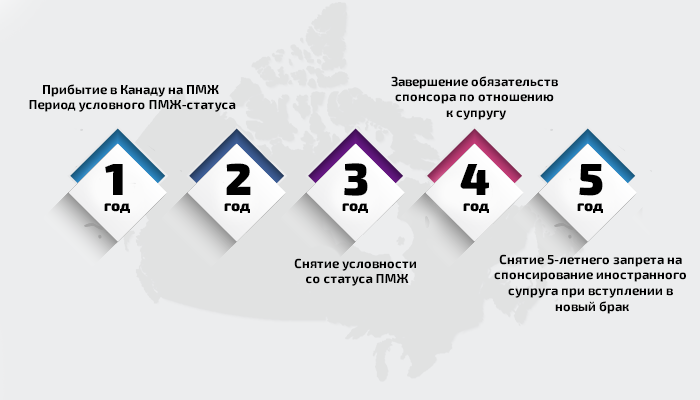 WHY WE ARE TRUSTED?

If you would like more information or set up an appointment, please fill in the form. We remind you that sending the form does not impose on you any obligations; you do not need to sign anything.

LyudmilaTeacher
Thank you so much for the professional advice on immigration to Canada under the program “Family sponsorship” that influenced the rest of my life. Lyudmila, city of Tel Aviv, Israel

SvetlanaHealth care worker
I want to thank you once again for your assistance in documents preparation, as well as for handling my immigration case. Thank you very much for your professionalism, understanding and timely support in all aspects of my uneasy immigration to Canada. Svetlana city of Vaughan, Ontario, Canada

ValeriaRetiree
I would like to express my gratitude for your professionalism and invaluable assistance that you offered me. From the initial consultation on immigration to Canada, preparation of necessary documents and assistance in proper filling out of documents for immigration under the program “Family sponsorship in Canada.” Valeria ,Toronto, Canada.

HOW DO WE WORK?

YOUR REQUEST IS ACCEPTED

Thank you for your request, we will contact you shortly
CLOSE

Please fill your phone number below, and we will call you soon

Sorry, this entry is only available in Russian.